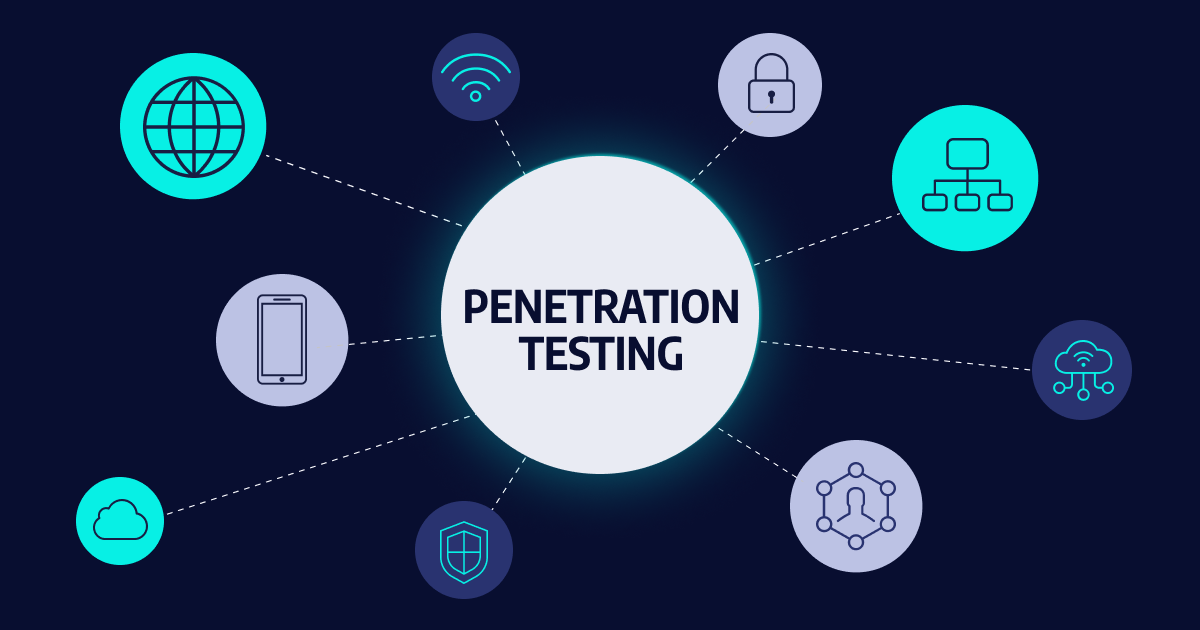 What Is Penetration Testing?

Penetration testing (pentesting), is a cybersecurity technique used by organizations to identify and remediate security vulnerabilities. Organizations hire ethical hackers to imitate the tactics and behaviors of external attacks. This makes it possible to evaluate their potential to compromise computer systems, networks, or web applications.

In this article we’ll review the following penetration testing types:

Network penetration testing finds and exploits the most exposed vulnerabilities in network infrastructure such as servers, firewalls, and switches. This type of testing can help protect your business from common network-based attacks, such as:

Wireless communications are services that allow data to move in and out of networks and must be protected from unauthorized access and data exfiltration. Wireless penetration testing is used to identify risks associated with wireless networks and evaluate weaknesses such as:

If a threat actor has physical access to a server room or other sensitive facility, they can potentially compromise the entire network, which can have devastating effects on business, customers, and partnerships. Physical penetration testing can help secure an organization’s physical assets from threats such as social engineering, tailgating, and badge cloning.

Physical penetration testing finds weaknesses in physical controls such as locks, doors, cameras, or sensors, and allows the organization to quickly remediate defects.

When it comes to security, users are often considered the weakest link of the security chain, and are a common target for attackers. Social engineering penetration testing focuses people and processes in the organization and the security vulnerabilities associated with them. It is performed by ethical hackers who attempt social engineering attacks which are commonly experienced in the workplace, such as phishing, USB dropping, and spoofing.

The goal is to identify vulnerable individuals, groups, or processes, and to develop pathways for improving security awareness.

Perform client-side testing to identify specific network attacks, such as:

The types of tests conducted on hardware, firmware, and communication protocol depend on the connected device. For example, some devices may require data dumping through electronic components, firmware analysis, or signal capture and analysis.

Red teaming combines physical, digital, and social contexts to simulate a comprehensive real-life attack scenario, making it distinct from standard penetration testing. It encompasses tasks related to the various types of penetration testing. While a standard pentest aims to identify as many vulnerabilities as possible in a set timeframe, it is typically limited by artificial restrictions such as the task scope.

Regular penetration tests are important, but they don’t provide realistic conditions, such as combined attack techniques. Red teaming allows security teams to assess the overall environment and understand how its components function together. It requires critical thinking to identify new, complex vulnerabilities.

Bright Security significantly improves the application security pen-testing progress. By providing a no-false positive, AI powered DAST solution, purpose built for modern development environments the pen-testing process can be automated and vulnerabilities can be found faster and at a lower cost. Moreover, integrating Bright Security into DevOps environments enables you to run DAST scans as part of your CI/CD flows to identify a broad set of known (7,000+ payloads) security vulnerabilities early in the development process.